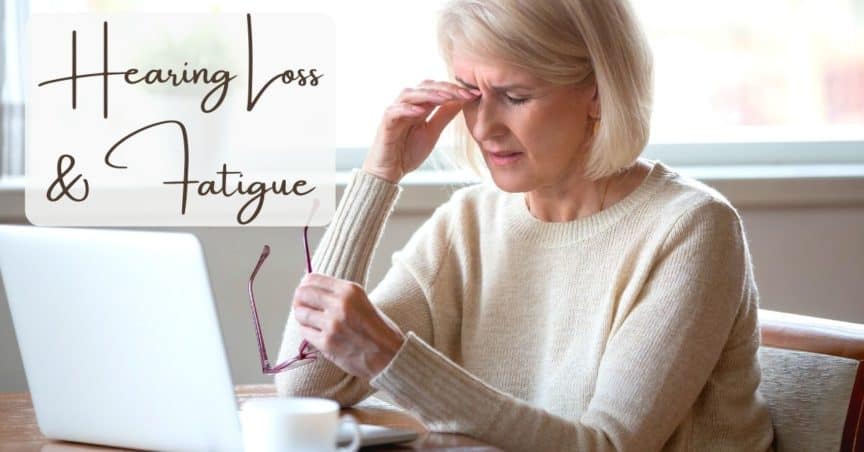 Listening fatigue happens to everyone. It’s probably happened to you many times in your life. After we’ve participated in a conversation or otherwise listened to speech for a while, our brains need a break. Listening fatigue can happen in any situation in which you’re focused on listening for an extended period of time.

It doesn’t have to be speech alone. Music, bird calls, watching television, or just about anything else that requires close attention can lead to listening fatigue. Professional sound engineers deal with listening fatigue on a daily basis; most say they take a break every hour to try to stave it off until as late in the day as possible.

The problem is, hearing loss makes listening fatigue set in much faster than when our hearing is normal.

These electrical signals make their way to the auditory cortex in the temporal lobe, which occupies most of the space in the brain behind your ears. All sound that your ears take in makes its way to this part of the brain undifferentiated, meaning that your ears and auditory nerves don’t know the difference between meaningful sound, like speech, and background noise. It’s all nonsense until it gets to the brain.

From that point on, you might think of the speech you’ve heard as more of a thought. Even though it just happened a moment ago, it is now a memory, and it is in the realm in which we perform higher-order thinking. We consider the meaning of what we’ve heard, evaluate its truth, compare it to other ideas we have in our memory, and formulate responses.

You can see how all this work that our brain is doing, mostly without our noticing, cannot be sustained indefinitely. At some point, we succumb to listening fatigue.

When we have hearing loss, less information travels to the brain than under normal circumstances. Pathways that have allowed electrical signals to flow for years are no longer sending anything, and the auditory cortex sees nothing in a place where it used to have a lot of work to do.

But the rest of your brain is still aware that a conversation is going on, and that there should be something where there is nothing. While someone is talking, you’re just getting little bits of what they’re saying (usually lower frequencies, missing consonant information). Some words you can tell, but it takes a lot of thinking to put together a complete sentence.

In essence, you are now using your frontal cortex, the part of the brain that is usually responsible for the higher-order thinking mentioned above, and putting it to work trying to decipher speech, which is normally taken care of automatically by the auditory cortex. It’s also more difficult to remember what you’ve heard: the auditory cortex normally sends the speech it interprets to short term memory, but now the process of interpretation is happening elsewhere in the brain and the auditory cortex is doing much less work than normal.

This is exhausting because it significantly over taxes your frontal cortex. It’s called cognitive load, and it means that your brain is being overworked.

If you’re experiencing more fatigue than usual in social situations or other periods of focused listening, you should get your hearing tested and start treating your hearing loss with hearing aids as soon as possible. Over time, disuse of the auditory cortex will lead to its atrophy, which means you’ll actually lose the ability to understand speech even when you hear it perfectly. Your brain can be retrained to hear speech once you get hearing aids, but it’s better to avoid the problem in the first place.

Hearing aids, in most cases, can restore hearing to near normal. Some newer models can prioritize speech over background noise, actually creating better than normal hearing conditions in noisier environments. You’ll no longer experience listening fatigue any faster than you did before you had hearing loss!