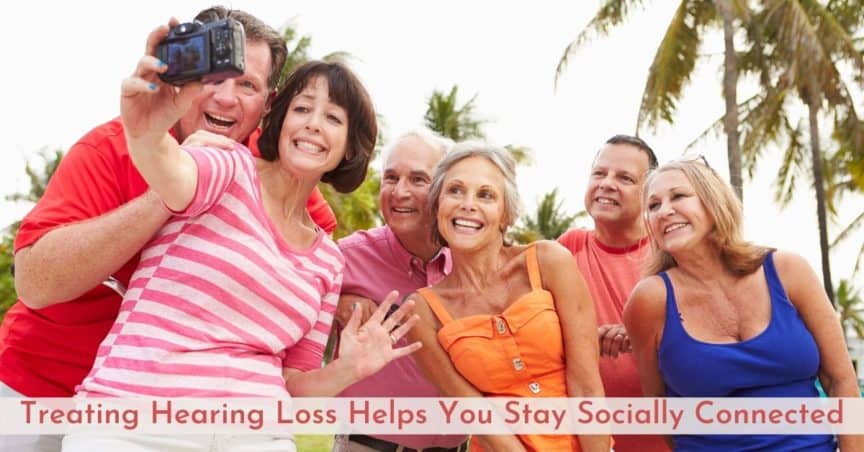 One of the most dangerous consequences of leaving our hearing loss untreated is the increased risk of loneliness and social isolation. While the “loneliness in a crowd” feeling is common for those who can’t follow a conversation due to hearing loss, the potential subsequent prolonged state of loneliness is disastrous for health and well-being. Social isolation, where a person doesn’t have contact with anyone, should be avoided at all costs.

Hearing Loss Nudges Us Away From Social Activity

It makes sense, unfortunately, that hearing loss can lead to social isolation. If you’re always asking people to repeat themselves or pretending to hear just to let a conversation move forward, you’re not participating in social activity at the level you should expect. It’s exhausting to try to keep up when you can’t hear, and sooner or later you’ll start declining some invitations and stop reaching out. It’s just not worth the bother, right?

The fact is that a prolonged state of loneliness is one of the most dangerous states of being that a person can experience in their lifetime. We are social animals, and loneliness is a hard-wired warning sign that we need to find the group. In fact, those who report feeling lonely are at a 26% increased risk of an early death. Researchers who have studied loneliness in the past few years have equated the negative health effects of loneliness as equivalent to smoking 15 cigarettes a day. It seems our bodies, when we don’t interact with others on a regular basis, simply start to shut down.

The problem is more common than we might think, with 17% of those over 65 years old living in a state of social isolation. That’s almost ⅕ of retirement-age adults. And over 45% of women over the age of 75 live alone. While living alone is not the same as experiencing loneliness and social isolation, it opens the door for these conditions. Those who live alone can lead healthy, socially active lives, but hearing loss will make this near impossible.

When we can’t hear what’s being said, we’re not really connecting with those around us. The longer we go without being able to hear, the more likely we are to experience brain atrophy in the auditory centers of the brain, where speech is interpreted. At the same time, conversations we have in this state of non-hearing overly stress the frontal cortex, which needs to work overtime to try to discern what’s being said while also doing its usual work of trying to make sense of it and formulate a response. This is why hearing loss is so exhausting. And because hearing loss is often a part of getting older, many people mistake the exhaustion they feel from hearing loss for a separate, physical issue related to aging.

If you have a hearing loss, one of the first signs that you might pick up on is that you have difficulty discerning speech when background noise is present. If you’re out at a restaurant or social gathering with a friend or loved one and you have trouble hearing what they’re saying, even if they’re close by, with all the background noise and music, it’s an early sign of hearing loss. This is the first type of situation in which people with hearing loss start to feel the exhaustion that hearing loss brings and the frustration with being unable to communicate as freely as they once did. If this is happening to you, now is the best time to start dealing with your hearing loss, rather than going the other way and avoiding social gatherings.

Get a Hearing Test

If you are suffering from hearing loss, the best way to avoid the catastrophic results of loneliness and social isolation is to schedule a hearing test and get fitted with hearing aids. Far from making us “old,” hearing aids, by addressing the issues that keep us from participating nimbly in conversation, keep us feeling young and active. They will prevent the exhaustion that results from untreated hearing loss and let you stay connected to those you care about, and meet new people with ease.